St Cuthbert was born in 634 in Lauderdale, near Old Melrose Abbey in Scotland.

One night while still a boy, employed as a shepherd, he had a vision of the soul of St Aidan being carried to heaven by angels, and later found out that St Aidan had died that night. He then decided to become a monk.

He was a monk, Bishop and hermit, associated with the monasteries of Melrose and Lindisfarne in the Kingdom of Northumbria, in North East England  and the South East of Scotland.

After his death in 687 he became one of the most important medieval saints of Northern England, and is buried in Durham Cathedral.

According to Bede‘s life of the saint, when Cuthbert’s sarcophagus was opened eleven years after his death, his body was found to have been perfectly preserved or incorrupt.

This apparent miracle led to the steady growth of the worship of St Cuthbert after his death to the point where he became the most popular saint of Northern England. Numerous miracles were attributed to his intercession and to intercessory prayer near his remains.

St Cuthbert is regarded as the patron saint of Northern England and his feast day is the 20th March.

Ever living God, who did call your servants Aidan and Cuthbert to proclaim the Gospel in

Northern England and endued them with loving hearts and gentle spirits: Grant us grace to

live as they did, in simplicity, humility and love for the poor; through Jesus Christ, who

came among us as one who serves, and who lives and reigns with you and the Holy Spirit, 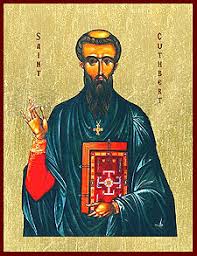 one God, now and for ever. Amen

Cuthbert grew up in or around Lauderdale, near Old Melrose Abbey, in Scotland. He had decided to become a monk after seeing a vision on the night in 651 that St Aidan, the founder of Lindisfarne, died, but he seems to have seen some military service first.

He was quickly made guest-master at the new monastery at Ripon, soon after 655, but had to return with Eata of Hexham to Melrose when Wilfrid was given the monastery instead. About 662 he was made prior at Melrose, and around 665 went as prior to Lindisfarne.

Cuthbert retired in 676, moved by a desire for the contemplative life.

Shortly afterwards, Cuthbert moved to Inner Farne island, two miles from Bamburgh, off the coast of Northumberland, where he gave himself up to a life of great austerity. At first he received visitors, but later he confined himself to his cell and opened his window only to give his blessing. 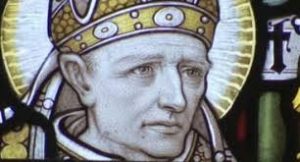 In 684 he was made Bishop of Lindisfarne, but by late 686 he resigned and returned to his hermitage as he felt he was about to die, although he was probably only in his early 50s.

The earliest biographies concentrate on the many miracles that accompanied even his early life, but he was evidently indefatigable as a travelling priest spreading the Christian message to remote villages, and also well able to impress royalty and nobility. Unlike Wilfrid, his style of life was austere, and when he could, he lived the life of a hermit, though still receiving many visitors.

He appears to have undergone military service, but at some point he joined the very new monastery at Melrose, under the prior Boisil. Upon Boisil’s death in 661, Cuthbert succeeded him as prior. Cuthbert was possibly a second cousin of King Aldfrith of Northumbria (according to Irish genealogies), which may explain his later proposal that Aldfrith should be crowned as monarch.

Cuthbert’s fame for piety, diligence, and obedience quickly grew. When Alchfrith, king of Deira, founded a new monastery at Ripon, Cuthbert became its praepositus hospitum or guest master under Eata. When Wilfrid was made abbot of the monastery, Eata and Cuthbert returned to Melrose. Illness struck the monastery in 664 and while Cuthbert recovered, the prior died and Cuthbert was made prior in his place. He spent much time among the people, ministering to their spiritual needs, carrying out missionary journeys, preaching, and performing miracles.

In 684, Cuthbert was elected Bishop of Hexham at a synod at Twyford (believed to be present-day Alnmouth),but was reluctant to leave his retirement and take up his charge; it was only after a visit from a large group, including king Ecgfrith, that he agreed to return and take up the duties of bishop, but instead as Bishop of Lindisfarne, swapping with Eata, who went to Hexham instead. He was consecrated at York by Archbishop Theodore and six bishops, on 26 March 685.

But after Christmas 686 he returned to his cell on Inner Farne Island, where he died on 20 March 687, after a painful illness.

He was buried at Lindisfarne the same day, and after long journeys escaping the Danes his remains chose, as was thought, to settle at Durham, causing the foundation of the city and Durham Cathedral. 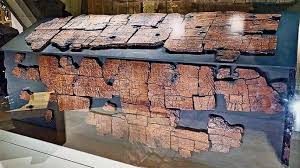 The St Cuthbert Gospel is among the objects later recovered from St Cuthbert’s coffin, which is also an important artefact.

After Cuthbert’s death, numerous miracles were attributed to his intercession and to intercessory prayer near his remains.

According to Bede‘s life of the saint, when Cuthbert’s sarcophagus was opened eleven years after his death, his body was found to have been perfectly preserved or incorrupt.

This apparent miracle led to the steady growth of the worship of St Cuthbert after his death to the point where he became the most popular saint of Northern England. Numerous miracles were attributed to his intercession and to intercessory prayer near his remains.

In 1104 Cuthbert’s tomb was opened again and his relics translated to a new shrine behind the altar of the recently completed Cathedral. When the casket was opened, a small book of the Gospel of John, measuring only 138 by 92 millimetres (5.4 × 3.6 inches), now known as the St Cuthbert Gospel (now in the British Library Additional MS 89000, formerly known as the Stonyhurst Gospel), was found. This is the oldest Western book to have retained its original bookbinding, in finely decorated leather.

Cuthbert’s shrine was destroyed in the Dissolution of the Monasteries, but, unusually, his relics survived and are still interred at the site, although they were also disinterred in the 19th century, when his wooden coffin and various relics were removed.

St Cuthbert’s coffin remains at the cathedral and is an important rare survival of Anglo-Saxon carving on wood. When the coffin was last inspected on 17 May 1827, a Saxon square cross of gold, embellished with garnets, in the characteristic splayed shape, used later as the heraldic emblem of St Cuthbert in the arms of Durham and Newcastle universities, was found. 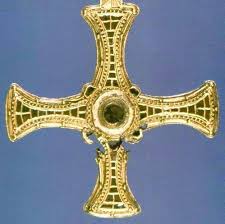